Demurrage and Detention: What are they? 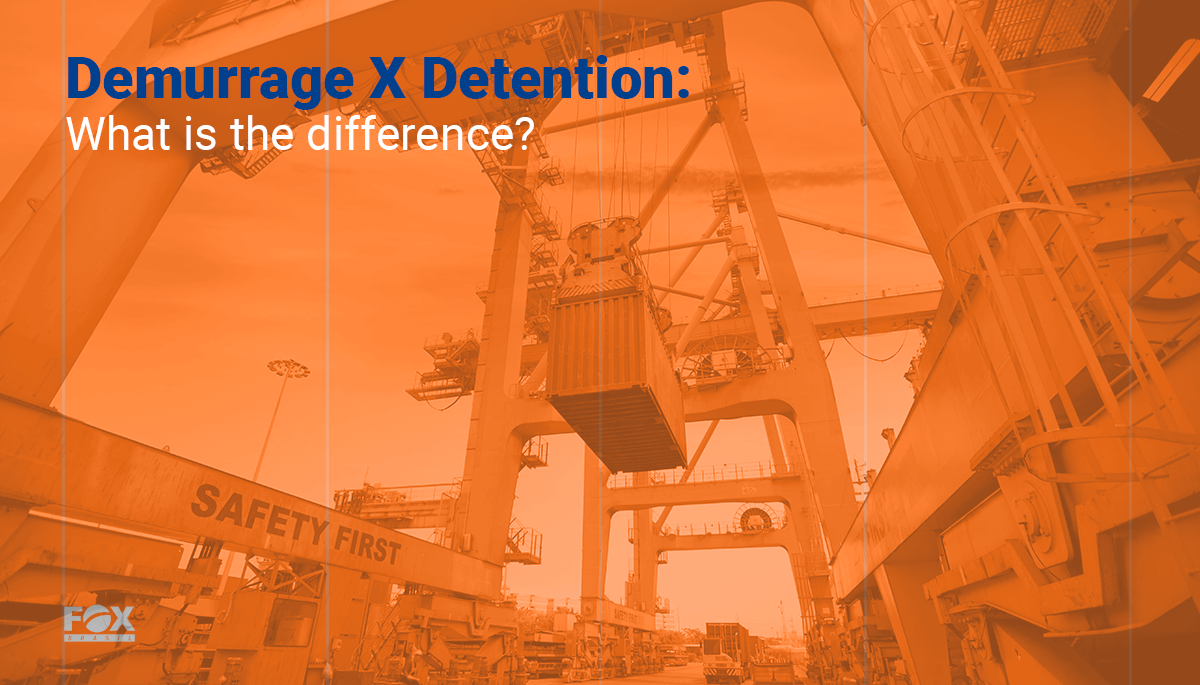 These two terms are frequently used in the world of international trade, but, as important as they are, not everyone is familiar with their meaning. What do they have in common? What makes them different? Find out bellow!

It is a fine charged for the exceeding time that a loaded container remains at the port. For example, you, an importer, book a container to transport your cargo, and make a 7-day agreement with the container owner. If that container arrives at the port and stays there, loaded, for 9 days, there is 2 days of demurrage to be paid. The longer the container stays at the port, the higher the costs.

The value of the demurrage is unique to each container owner or shipping line, but freight forwarders are often capable of finding better offers in the container market due to their contacts and previous experiences.

The demurrage period starts as soon as the free time period ends.

Wait, what is Free Time?

Free time refers to the amount of time which a container can be used by the importer or exporter with no fees charged.

And what about Detention?

Just like there is an established period of time a container can stay at the port, there is also a time limit for how long it can take for the container to be collected at the port, unloaded at the destination, and then returned to the port empty. If this process exceeds the settled time, a fine is charged, and this fine is called detention.

There are cases where demurrage and detention can be charged together in a single fine. The shipper’s agreement over the use of the container is made in full, which means that, it is stablished a period for the whole operation to be completed, starting to count from the day in which the container arrives loaded at the port, and only stops when the container is returned empty to the same port.

They are vital to disincentivize delays in pickups and drop-offs. The more time a container is being used for a single shipment, whether remaining loaded at a port or in ground route, they will be unavailable for other shippers, which will inevitably cause delays and it will most likely affect the supply chain in a general manner. Not only that, but stationary containers being left at ports for too long means storage space being occupied unnecessarily when it could have been used for storing other containers.

Combined Demurrage and Detention is a fine paid for exceeding the equipment usage time in general, the usage starts counting as soon as the container arrives at the port, not only when it leaves to be unloaded at the destination, like what happens in Detention.

And, lastly, free time refers to the amount of time a container can be in use by the importer or exporter, with no fees charged.

The concept and the importance of cargo insurance

Demurrage and Detention: What are they?

These two terms are frequently used in the world of international trade, but, as important as they are, not everyone is familiar with their meaning. What do they have in common? What makes them different? Find out bellow! What is […]

As much as the concept of Black Friday involves it happening the day after Thanksgiving, a holiday that isn’t celebrated at all in Brazil, the discounts event is almost as anticipated as Christmas by Brazilians.    More Brazilians are shopping […]

This website uses cookies to improve your experience while you navigate through the website. Out of these, the cookies that are categorized as necessary are stored on your browser as they are essential for the working of basic functionalities of the website. We also use third-party cookies that help us analyze and understand how you use this website. These cookies will be stored in your browser only with your consent. You also have the option to opt-out of these cookies. But opting out of some of these cookies may affect your browsing experience.
Necessary Sempre ativado
Necessary cookies are absolutely essential for the website to function properly. These cookies ensure basic functionalities and security features of the website, anonymously.
Functional
Functional cookies help to perform certain functionalities like sharing the content of the website on social media platforms, collect feedbacks, and other third-party features.
Performance
Performance cookies are used to understand and analyze the key performance indexes of the website which helps in delivering a better user experience for the visitors.
Analytics
Analytical cookies are used to understand how visitors interact with the website. These cookies help provide information on metrics the number of visitors, bounce rate, traffic source, etc.
Advertisement
Advertisement cookies are used to provide visitors with relevant ads and marketing campaigns. These cookies track visitors across websites and collect information to provide customized ads.
Others
Other uncategorized cookies are those that are being analyzed and have not been classified into a category as yet.
SALVAR E ACEITAR